The Guomindang had its own unsolved problems and as national unification remained an elusive goal, and commander Chiang Kai-shek who was a member of the nine-man Guomindang Central Executive Committee was desperately in need of money that Soong – Chiang’s new brother in law had to get him what he needed to resume the stalled Northern Expedition: 1.6 million yuan every five days.

The Guomindang flag, with its white sun on a blue and red ground, flew from Canton to Mukden and its task now was to establish a political and economic structure that would consolidate the achievement. Especially, the Nationalists won full tariff autonomy in 1928 in exchange for abolishing internal transit taxes and a further range of special supertaxes that had been imposed since the Canton government of Sun Yat-sen. As a result customs revenues rose dramatically with enormous numbers, far exceeding Soong’s expectation. Despite the government’s attempts to reform China, Guomindang itself maintained a consistent budgetary deficit. There were no income taxes nor a national land tax. Obviously, achieving a stable political structure in a long run task was too much for the Guomindang government.

Guonmindang – a failure of will to confront China’s problems directly.

There were immense changes to Chinese life in 1920s and 1930s when the Guomindang was still in power. Clearly, medical care became more sophisticated, new hospital were built, schools and college campuses featured sports ground and laboratories. Cinemas established themselves as part of urban life; radios and phonographs appeared in the richer homes; and Chinese men began sporting business suits, derbies, or cloth caps, the younger women short skirts and high-heels. Moreover, there was a dramatic rise in the sale of frankness of biological and sexual practice manuals and cigarette smoking became a national fad. 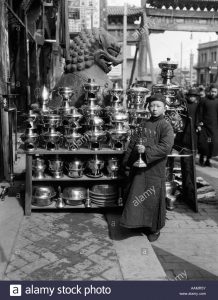 The young may have sought to further the cause of social justice by joining the CCP, but they found no cultural freedom once they became members. The goal of the New Life Movement was to make the citizens enhance their patriotism to willingly sacrifice for the nation.

China and the United States

Undeniably, much of the focus of the Guomindang had to be on the international diplomatic area. The Nine-Power Treaty had influenced China and strongly supported the idea of maintaining the independence and administrative integrity of China. In the summer of 1928, Soong met with the American minister in Peking to sign a treaty in which the US agreed to let China fix its own tariffs on foreign imports. American especially pleased with the marriage between Chiang Kai-shek and Soong Meiling who had a strong connection to US from education to family.

The American’s involvement in China also increased the expansion of Christian when focusing on education, medical care and training, etc. Medical advances in China were also considerable, owing in large measure to the impact of private charity. For example, the Rockefeller Foundation which in 1915 made a major commitment to support a medical school in China. Furthermore, by muting the problems of Chinese emigration to the US, it built up the harmonious relations.

Japanese policy toward China had unexpected changes after the beginning of the First World War. In Japanese government’s eyes, China was the primary target for its missions of spreading its culture to every corner of the world. However, Japanese’s trading position in China was damaged. In 1927-1928, the Guomindang Communist alliance conducted a new era of antiforeignism while the Japanese army had tensions with Chinese government. Zhang Xueliang and Chiang Kai-shek both kept up steady pressure on the Japanese, refusing to negotiate new railway deals, etc. The Guomindang also started to say no to the Japanese imports.

Faced with undesirable domestic violence against their politicians and industrialists, and a decline in the economy, the Japanese government began to take actions in Manchuria. The Mukden incident, which prompted deeper levels of anti-Japanese and antiforeign feeling among Chinese, happened on September 18, 1931. The bombings – which killed numerous innocent civilians – was a full-scale Japanese attack on Shanghai’s Chinese defenders and in May 1932, they forced Chinese to accept the drawing of a neutral zone around the city. The last stages in this drama of Japan’s establishment of a base in northeast China came in May 1933 by setting up a radio station on Chinese military frequencies to give fake orders to Chinese field commanders, causing confusion in the Chinese battle plan.