Qianlong was the longest ruling emperor of China, ruling from 1736 until 1799. When combined with his father and grandfather, these three emperors ruled for almost 14 decades, and this explains why other countries thought of China as such a stable country.

Qianlong made many changes in both government and the arts, but there was some decline in the way the empire operated under his reign. He did not have to face any controversy in becoming the emperor, since his father had secretly named him heir, and locked his decision in a casket to be opened when he died. Quianlong wanted to be seen as more than the emperor of China; he wanted to be known as “the ruler of a multicultural Asian empire” (94). Besides being concerned with politics he took an interest in religion, literature and bringing the different races together.

His biggest contribution during his reign was bringing large areas of western territory under Chinese rule. He actually doubled the territory held. He also put an end to the conflict with the Zunghar, and negotiated a border on the western side with Russia, using a Manchu bannerman Zhaohui to accomplish much of this. The new region in the west was kept under the Manchus and a few of the Chinese bannermen. The new area was mostly Muslim, and they were allowed to keep their own religion and follow the diet that their religion demanded. The Muslim leaders received titles and salaries to help keep them loyal to the Qing. They did not have to shave their heads or grow the queue, and the area allowed China to trade in copper, wool, and valuable stones. The Manchu court was allowed to keep the gold and jade mines. 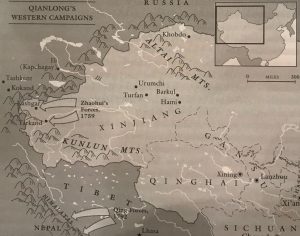 Qianlong created the “Grand Council” to help him rule (96). He participated in meeting with officials, kept up with documents, traveled to many parts of the empire, and sent out communications on policies, but the Grand Council made many of the actual decisions. He did not really follow through on the tax reforms put in place under Yongzheng.  He made the wealthy provinces send their extra money to the poorer ones. This meant, though, that the richer provinces could not become stronger, and the poorer ones did not try to collect extra taxes or work to fix their local economy. Qianlong also undid the policies that his father and grandfather had put in place to allow the banner organizations to raise extra money. This led to more corruption of local politicians who kept extra tax money rather than sending it to the financial commissioner. The past corruption of collecting extra fees from the people started up again. To combat this, a law was put in place that all purchases had to be approved by the Ministry of Revenue, but this just led to too much paperwork that the office could not actually process.

He was determined to expand the empires dedication to the arts, and the collection of paintings, calligraphy and drawings held were greatly increased. He also wanted to have a complete record of Manchu history, so he had genealogies, histories and rituals written and collected. He brought the most famous writing together in a collection known as The Four Treasuries which was a collection of classical writings, history, and philosophy. Under Qianlong, Confucianism began to change to go along with some of the changes taking place in China. But Confucianism suffered when Yan Ruojo proved that some of the sections of Confucius that were used on the state exams were actually forgeries. Along with that, many of the people who were able to pass the exam were not actually finding jobs, so some of the elite people were losing faith in the value of the exams.

People began to think more about kaozheng, which was a method of using data to evaluate things. They used kaozheng to study math, linguistics, astronomy and geography. Some of these kaozheng thinkers came from wealthy merchant families located in the growing urban areas. A very famous book, The Dream of the Red Chamber which was also known as The Story of the Stone was written during Qianlong’s reign. It was a love story but it gave a detailed view of the higher class Qing life, including the power of the father in the family, the way they were able to get around any legal issues because of their connections, and the great wealth that gave them a grand lifestyle and many servants. 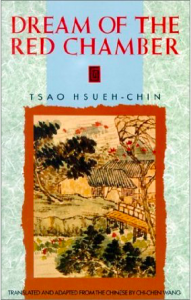 In the later part of Qianlong’s reign, mistakes on the government’s part combined with discontent among the people. Some military campaigns did not go well and corruption in government agencies returned in a widespread way. The government did not do a good job of taking care of financial issues in the empire, at the same time that the population was continuing to expand which called for more resources. The government was still waging military campaigns, but at the same time some of the people started to rebel in different areas. Some of the Muslim population was beginning to rebel as well and the Qing had to try to keep those areas under control.

The people started to become upset with the ruling government. It could be because the empire seemed to experience many difficult issues. The emergency grain supplies were empty much of the time, the Grand Canal was not maintained, some of the banner troops started to become unruly, and there was corruption at all levels of the bureaucracy. The Qing also did not put in place local governments in new territories which made the pressure on the existing government even greater. Many people were upset that the wait was so long to get a job, so when they finally got a post they tried to get money from the local people, which made them angry and frustrated.

Qianlong decided to abdicate in 1796 because he did not want to reign longer than his grandfather had, due to filial respect. Qianlong did not let his son take over, but let a former Manchu guard officer named Heshen, who had been advising him for years, take over. Before that, Heshen had been given much power in the empire. Heshen used the appointment to make money for himself and his friends through corrupt methods of collection and misusing funds for military campaigns. His actions led to even more people becoming disillusioned with the government. When Qianlong died in 1796, his son finally took over and forced Heshen to commit suicide for his wrongdoings.

Qianlong was responsible for a lot of growth in the empire, especially in terms of the size, and in the areas of the arts and literature. But he also oversaw the beginning of the people losing trust in the emperor and the government bureaucracy.